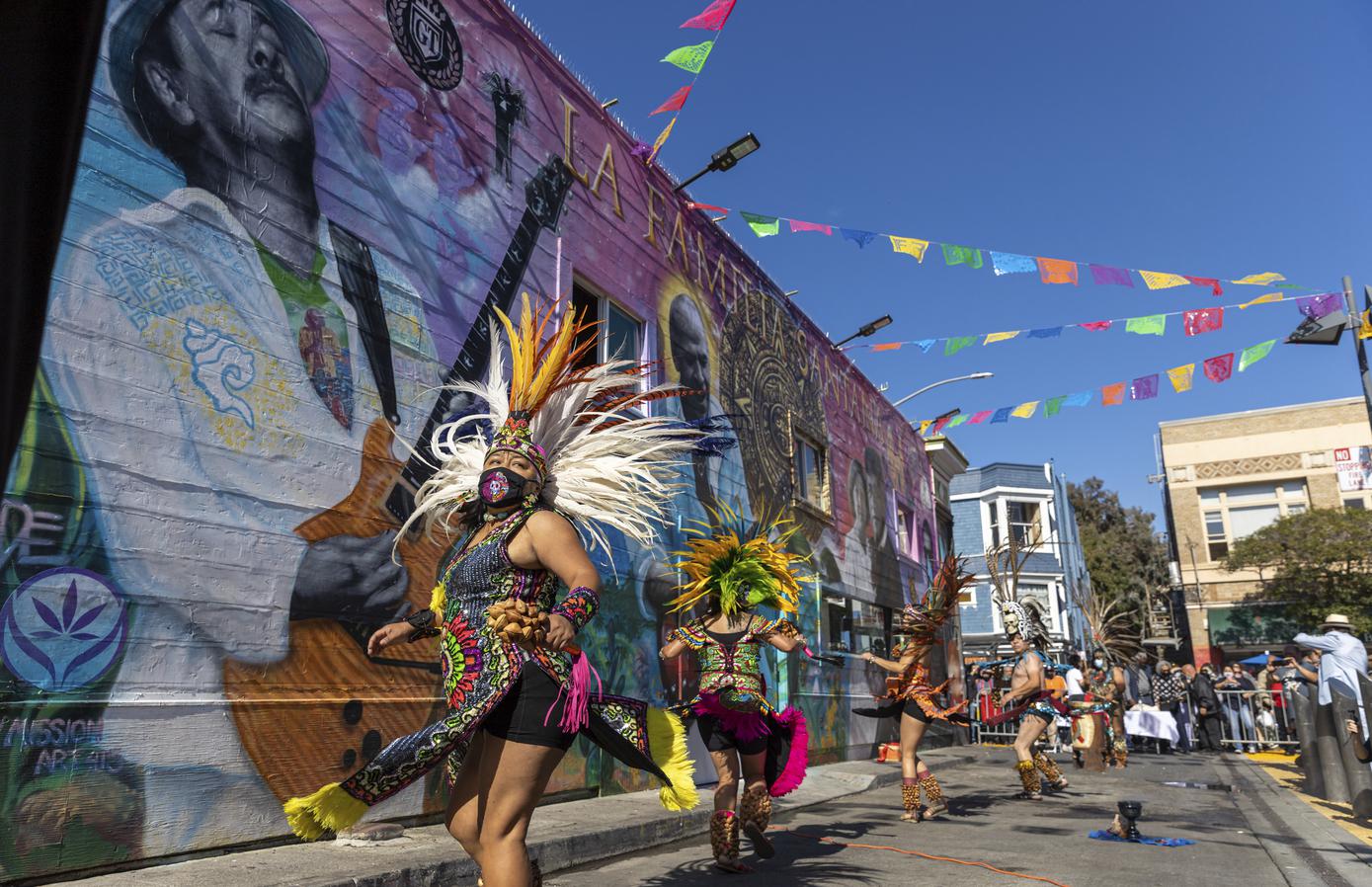 Under a canopy of papel picado and the groove of electric guitars and congas, the Mission District of San Francisco celebrated the life and legacy of musicians Carlos and Jorge Santana and their families, consecrating them as local legends with the unveiling of a vibrant fresco Friday.

The musicians, best known for the Latin rock groups Santana and Malo, took root in the Mission in the 1960s, bringing with them from Mexico a passion for their craft and a desire to make San Francisco their own, said family members and officials at the ceremony.

“Because of their vision and their desire to be a part of it, we are the beneficiaries of their spirit, their love, their musical genius that has touched the lives of so many,” said the Mayor of London Breed , standing in front of the freshly painted mural in the plaza above 24th Street Mission BART station.

The mural, the most recent in the famous Mission collection, shows brothers Carlos and Jorge Santana playing on the guitar; their parents, José and Josefina; and Carlos’s son, Salvador, who carries on the family’s musical tradition. It features traditional Mexican and Mayan iconography, including pyramids, cacti, and a Mayan calendar.

The artwork was designed by Jorge Santana, guitarist for the San Francisco rock band Malo, who died exactly one year before Friday’s ceremony as work on the mural was just beginning. The mural was dedicated to him, and family and friends spoke fondly of him and his enduring legacy in rock and in the Mission.

“Jorge is here and he’s smiling at us,” said Lisa Brewer, who developed and oversaw the mural project. “He was a beautiful spirit.”

The mural has been painted over the past year by artists Mark Bode and Crayone. It is based on a sketch provided by Jorge Santana and Randolph Bowes, officials said.

There were musical performances, speeches and dances in honor of Jorge Santana and his family. The square above the BART station was the perfect spot for the mural, officials said, as it has been the site of countless events and demonstrations, and it was where Jorge Santana used to go. play with his brothers and friends.

Salvador Santana, a singer and keyboardist who occasionally performed shows with his uncle Jorge, said he was honored by the tribute and the way the Mission had welcomed his family over the years.

“It’s not about me, it’s not even about (Jorge); these are the familia Santana and the Misión! ” he said to a raving audience.

Carlos Santana, the international rock icon with 10 Grammy Awards to his name, thanked the Mission community for their support and pledged to make the celebration an annual tradition. He said he wanted to hold an annual ceremony, parade and concert at the Chase Center to raise funds to feed low-income residents of the Mission and several Mexican cities.

He said he was interested in founding a community center in the Mission called SW – short for “self-esteem” – for people in need of shelter, food or other resources, to help them. to become “a pillar of light”.

He stressed the importance of community, love and growth, and commended his mother for leading the Santana house and instilling valuable life lessons in him and his siblings as they were growing up in the bay area.

“From 62 to 69, that was it,” he said of the Mission. “It was primarily here that I spoke of the vision of being a multidimensional global musician.”