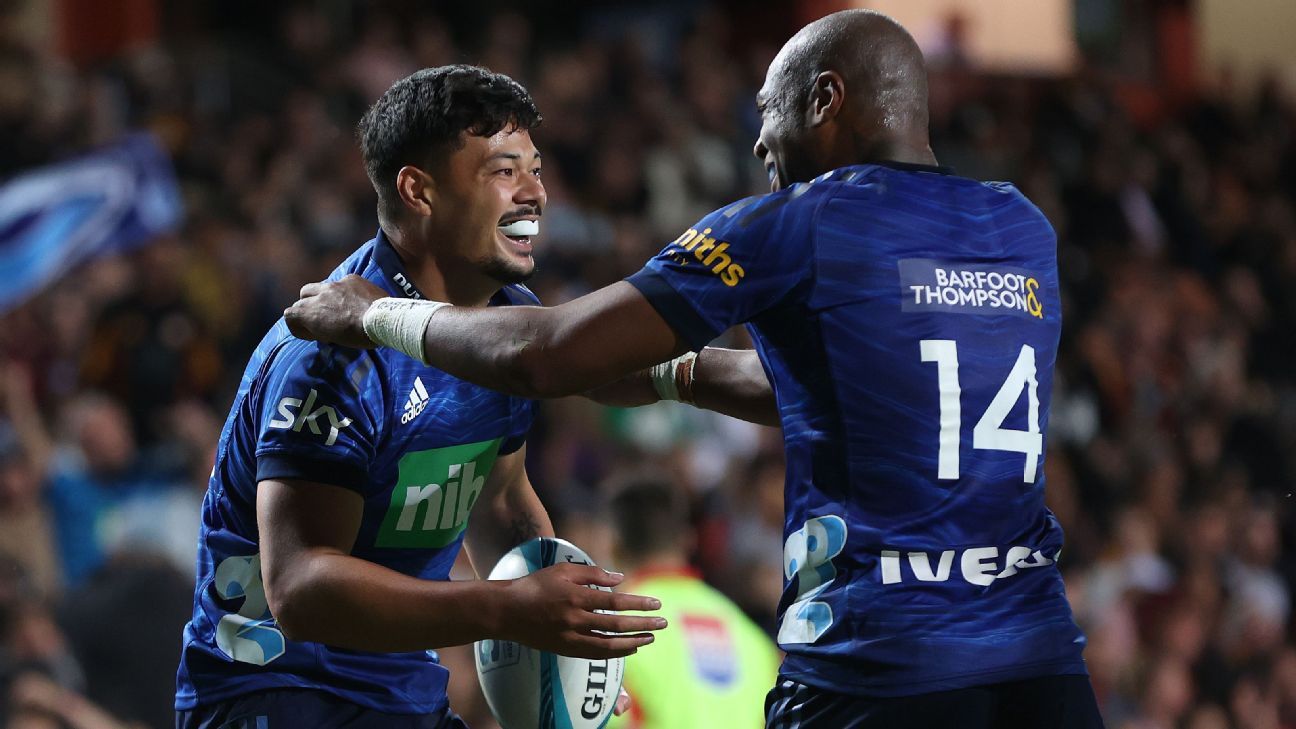 And the cream also appear to have risen to the top, with the Brumbies, Blues, Crusaders and Reds all having suffered just one defeat so far.

But tougher times lie ahead, at least for Australia’s two impressive franchises, with trans-Tasman games just one round away.


Read on as we look back at some of the Super – and not-so-super – action from Round 8.

The Blues don’t come; they are already there.

Saturday night’s 26-0 shutout win over the Chiefs was among their best in many years, as they blended ruthless attacking skill and sublime execution with ferocious, tireless defensive effort, and a hardened edge to the breakdown.

If there was a moment that reflected the Blues’ desperation in defence, it was Ofa Tu’ungafasai who threw an arm to dislodge the ball from a rampaging Samisoni Taukei’aho in the corner just before half-time. weather. Taukei’aho appeared to have scored, but TMO quickly found the forward and the Blues entered the break with their line intact, rather than at least a 5-13 scoreline.

But it will be the Blues’ sensational third try, Tom Robinson’s second, to feature in video highlights this week, as they raced 70 yards for a memorable five-pointer in which all their greatest offensive weapons featured. .

Doubling to recover a Chiefs kick, Beauden Barrett recovered the loose ball and then managed to slip an offload to winger Mark Telea, who charged downfield through the broken Chiefs chase.

The Blues winger then dropped a delicious switch pass to center Rieko Ioane, who headed for the left corner. While Ioane was taken off around 15 times, Telea was there to support, before Ioane received another throw-in and ensured the Blues were able to recycle the ball quickly.

As the Chiefs defense backpedaled, Barrett then spotted an unmarked Tom Robinson near the right sideline, the fly-half finding the back rower with a cross kick perfectly suited to the rebound for the try.

Barrett was back in the final 10 minutes of the game, the fly-half tossing a cut pass to AJ Lam for the bonus points try. After concussion issues, including talks he may have to give up the game, it’s great to see Barrett back doing what he does best.

The win set up a thrilling Good Friday contest between the Crusaders and the Blues in Christchurch, with both teams leveling 27 points on the competition ladder. Whoever emerges victorious at Orangetheory Stadium will be confident of dominating the overall standings heading into the final.

Crucially for the Blues, they still have a host of troops to return from injury and suspension. Saturday night they were without Caleb Clarke, Zarn Sullivan, Roger Tuivasa-Sheck, Finlay Christie, Akira Ioane, Nepo Laulala and Karl Tu’inukuafe, to name a few.

While they won the Super Rugby Trans-Tasman last year, this Blues side appear to be something special. They evoke memories of the 2003 champion team.

Mataele’s magic is still not enough for Force

Manasa Mataele continues to be a shining light for the Force in Perth.

The Fijian international has four tries for the season – and would have another if not for an illegal tackle from Tom Banks a fortnight ago – but Mataele’s effort in the Force’s tight loss to the Rebels was his best so far. day.

Receiving the ball half a yard inside the right touchline, Mataele took two steps and then darted towards the try line, just as the rebels outside center Stacey Ili appeared in cover.

With Ili’s tackle forcing his body over the sideline, Mataele was able to keep his composure to pin the ball down just inside the corner flag before hitting the bridge. It was a brilliant, aerobatic finish, and one that underscored what a valuable pickup it has been for the Force this year.

Mataele also played a part in the Force’s second down, sucking down two defenders before unloading on Jake Strachan, who then kicked in Kyle Godwin to win the run at in-goal.

Unfortunately, the Force continues to fail in the matches it has every chance of winning. Tim Sampson’s team even had the advantage of playing against 14 men for 30 minutes on Friday night.

Surely Savea had to opt for sticks?

Hurricanes skipper Ardie Savea was furious at full time in his side’s three-point loss to the Crusaders.

Moments earlier, Savea had opted to kick the corner in pursuit of a game-winning try, rather than have Jordie Barrett line up a shot on goal about 15 inches from the left sideline , a penalty one would expect. of his slotted achievements.

It turned out to be the wrong call when the Crusaders got up to challenge the lineout, making just enough of a mess in the contest for the front two packs to collapse to the ground and for referee Brendon Pickerill to declare the ball unplayable – then blows. for full time.

Savea immediately tried to protest to Pickerill, even asking the referee to consult the TMO in the hope that there had been cynical play.

“We came here and we wanted to prove a point. The Crusaders are the best team in this competition and I’m proud of my boys’ efforts.

“At the end of the day, it can come from either side, and we get an apology next week, but it’s too late. Without saying anything disrespectful, I would just like the officials to demand better .”

While Savea may have been right with a lineout violation, he certainly rolled the dice with his decision to go for the game-winning try. Wasn’t the prudent game to try your luck at the golden point?

TMO and the review of incidents of foul play continue to be a recurring theme in Super Rugby Pacific. Fortunately, there were only the two red cards in round 8, three dismissals less than the previous round.

But that didn’t stop TMO from returning to the limelight on Friday night in Perth, where Rebels center Ray Nu’u was eventually sent off after five separate replays of the poor tackle.

Whether it was a tech failure or the TMO Kyle Burnett simply mixing up the phases, it was embarrassing as fans on the ground and those watching at home were forced to sit for over four minutes of timeout.

“If you want to interfere in the game, you have to get it right,” said Stan Sport commentator and former Wallabies winger Drew Mitchell. “You can’t sit there and show the wrong image…you literally have a job.”

While the right call was finally hit on Nu’u, who caught Force back rower Brynard Stander high after failing to lower his body height in the tackle, the road to getting the decision was nothing short of embarrassing for all the people involved, and just plain infuriating to those watching.

We reported the concept of Super Rugby Pacific implementing a bunker system last week and although the NRL has had issues with its video review since its inception in 2016, it would never launch multiple reviews of poor vision.

Something needs to be done to fix these extended downtimes for TMO exams regardless.

Moana Pasifika has been a wonderful addition to Super Rugby Pacific but they have fought an uphill battle since it was confirmed they would be taking part in the competition.

First, they were left with less than six months to try to put together a team, then, on the eve of their debut, were hit by COVID, causing their inaugural match to be postponed. They then had two more games postponed as the virus swept through New Zealand teams.

The result of that has meant a brutal schedule, which then sees them come back up after just four days in Tuesday night’s catch-up game against the Hurricanes.

This limited, and now brutal, preparation must certainly contribute to their terrible disciplinary record. Going into their 37-17 loss to the Highlanders, Moana had conceded an average of 14 penalties per game – an unwelcome high in the competition. Friday night in Dunedin, they conceded 15 to the meager five of the Highlanders.

It allowed their hosts to kick in the corner on several occasions, and from there the Highlanders had a field day with their rolling maul, scoring three tries, while it also went straight led to two more.