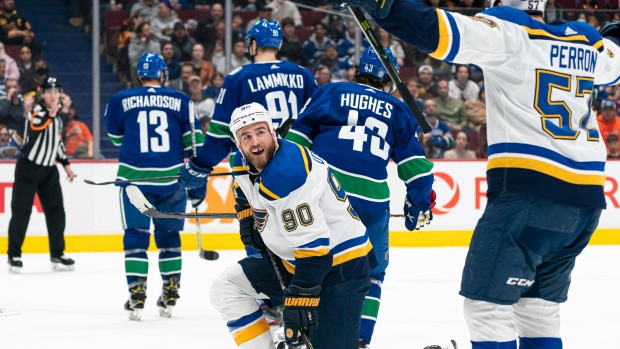 VANCOUVER — Ryan O’Reilly had a goal and an assist as the St. Louis Blues dashed the Canucks’ dim hopes in the playoffs again, beating Vancouver 4-3 on Wednesday.

Elias Pettersson scored twice for the Canucks (32-28-9), playing their fifth game in eight nights. Alex Chiasson also scored a goal for the home side.

A 22-save performance earned St. Louis Ville goalie Husso his 18th win of the season. Thatcher Demko stopped 20 of 24 shots for Vancouver.

The Blues also beat the Canucks on Monday and swept the three-game season series.

With 12 games left in the regular season, Vancouver is 10 points behind St. Louis, who hold the No. 1 wildcard spot in the Western Conference.

Pettersson brought the Canucks within one goal with less than five minutes on the game clock, beating Husso with a tight shot for his second of the night.

The goaltender made one of his biggest saves of the night with 70 seconds left, robbing Tanner Pearson with a glove save.

A blocked shot turned into a goal for the Blues midway through the third.

Canucks defenseman Travis Dermott came down to stop a Mackenzie MacEachern shot, but the puck bounced off him to Walker, who sent it into the Vancouver net to make it 4-2.

St. Louis took the lead in the final quarter on O’Reilly’s power-play goal.

Vancouver rookie Vasily Podkolzin was called up for a hold after beating Brandon Saad in the run and the Blues made the Canucks pay.

Perrson tossed the puck to Brayden Schenn below the goal line and Schenn immediately fed it to O’Reilly at the hash marks. O’Reilly had a point shot past Demko for his 15th goal of the campaign at 17:16 of the second.

The Blues’ shorthanded goal tied the game 2-2 earlier in the period.

Thomas beat Canucks defenseman Quinn Hughes for a breakaway and fired a shot behind Demko’s glove.

The Blues went 1-on-1 on the power play and the Canucks didn’t score on their solo advantage.

Pettersson gave Vancouver a 2-1 lead midway through the second with a fine goal from the top of the slot. The Swedish center intercepted a pass near the blue line, took a few strides, then launched a rocket for his 21st of the season.

Nic Petan recorded an assist on the play, scoring his first point for the Canucks.

The Blues entered the board 7:26 into the second when Leddy sent a long bomb under Demko’s glove for his second of the season, tying the game at 1-1.

Vancouver took the lead just 31 seconds into the second quarter. Brad Richardson sent Chiasson a blind backhand pass and the winger slipped a shot from the top of the slot for his seventh goal of the season.

Richardson picked up an assist on the play, scoring his first point since being claimed off waivers by the Calgary Flames on March 21.

A few stellar saves from Demko kept the game scoreless during the first.

His best of the period came at 10:20 when the star goaltender made a diving glove save to prevent Vladimir Tarasenko from the side of the net.

The Blues continue their Canadian swing on Friday when they face the Oilers in Edmonton. The Canucks host the Golden Knights on Sunday.

NOTES: Canucks captain Bo Horvat left the game after the first period and did not return. The team later said his absence was due to an illness unrelated to COVID. … St. Louis was without leading scorer Jordan Kyrou, a late withdrawal due to an unspecified illness. … The Canucks marked their fourth annual First Nations night with special warm-up jerseys designed by Musqueam artist Chase Gray and a ceremonial face-off.

This report from The Canadian Press was first published on March 30, 2022.