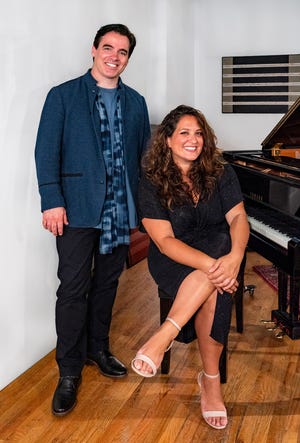 Often times, exposure to William Shakespeare’s work comes in the form of sitting in a classroom, listening to others read the words in a monotonous voice. This experience can make it difficult to appreciate and understand his words and the deep meaning behind them.

With “Shakespeare in Jazz: All the World’s a Song”, Daniel Kelly and his trio want to breathe new life into Shakespeare by infusing his lyrics with jazz music. The composer and pianist will be joined on stage by drummer Reggie Jackson and Grammy-nominated singer Nicole Zuraitis during their visit to ASU Kerr in Scottsdale on Saturday, November 13.

“The idea is for the music to be a lot of fun, very easy to understand and very memorable so that the language, which can be a bit difficult, connects,” says Kelly. “The idea is that, unwittingly, when you sing or listen to us sing it, you have an experience with Shakespeare and you might even memorize it. “

The show features passages from “Macbeth”, “A Midsummer Night’s Dream”, “Hamlet”, “Twelfth Night” and others.

“One of the giants”:The Nash turns 9 with music by Charlie Parker

“When you say them, you hear the rhythm”

Part of the language lends itself more easily to setting to music. “Twelfth Night” features song lyrics written by Shakespeare for actors. The music didn’t survive, but Kelly tries to recreate it based on what feels natural. As he read certain passages, such as “double, double toil and trouble; Burning Fire and Cauldron Bubble ”from“ Macbeth ”, he found himself starting to create music for them.

“Some of them, when you say them, you hear the beat,” Kelly says.

Most of the tracks are a mix of jazz and other styles, such as reggae, salsa or funk.

Before each song is performed, Kelly will provide the context of the room the lyrics come from, what happens in those works, and the meaning of the character’s lyrics.

“The themes are universal, whether it is wanting a loved one close to you, the power to be in love. I think that’s part of the reason Shakespeare has stood the test of time for over 400 years, ”Kelly says.

“As I am engaged as a composer with the material and as a performer making the audience sing along with me, using my music coupled with Shakespeare’s words, I appreciate and understand more deeply his brilliance and genius. “

“He was playing with language”

Kelly found parallels between Shakespeare and jazz musicians, especially in the playwright’s invention of a new language in his works.

“He played with language the way I feel jazz musicians play with melodies, rhythms and harmonies. As jazz musicians, we interact all the time on stage. I feel like there was this creative freedom when Shakespeare was writing these plays. He created so many words and phrases, ”Kelly says.

Since its inception four years ago, “Shakespeare in Jazz” has been presented to audiences of all ages, including schoolchildren, duos, trios and quartets. As with any jazz band, the trio often improvise on stage and the set list changes with each performance. Each performance is a different experience.

The idea of ​​combining jazz and Shakespeare came to Kelly when he was on tour and noticed the Shakespeare festivals and events he visited.

“Here I was in a small town, somewhere in the middle of America, and there’s a whole Shakespeare festival going on. I think it just made me feel like it’s something that I really want to dig into and unravel, ”Kelly says.

Using jazz to appreciate the language of Shakespeare

He starred in several high school Shakespeare plays, playing Nick Bottom in “A Midsummer Night’s Dream” and a minor role in “The Tame Shrew”. For a while, Kelly thought he wanted to be an actor, but composing music in middle school and high school made him fall in love with music and go that route.

Kelly says that even though he has starred in Shakespeare’s plays, it still takes a while for him to understand the playwright’s work. Through music, he was able to better connect with the texts.

“I wanted to use what is now my language of jazz music to gain a deeper appreciation for it,” Kelly says.

While preparing for the show, Kelly read Shakespeare’s plays, watched film adaptations, watched versions of graphic novels, and listened to audio recordings of his works.

“I was using every possible gateway in the language to understand it and see what resonated with me,” Kelly says. “I really took it on as a student. I still do it too. It’s all part of the fun, learning and growing process. When a passage resonates with me, I think that’s when the creative spark happens and I start hearing a song.

“Shakespeare in Jazz: Everyone is a Song”