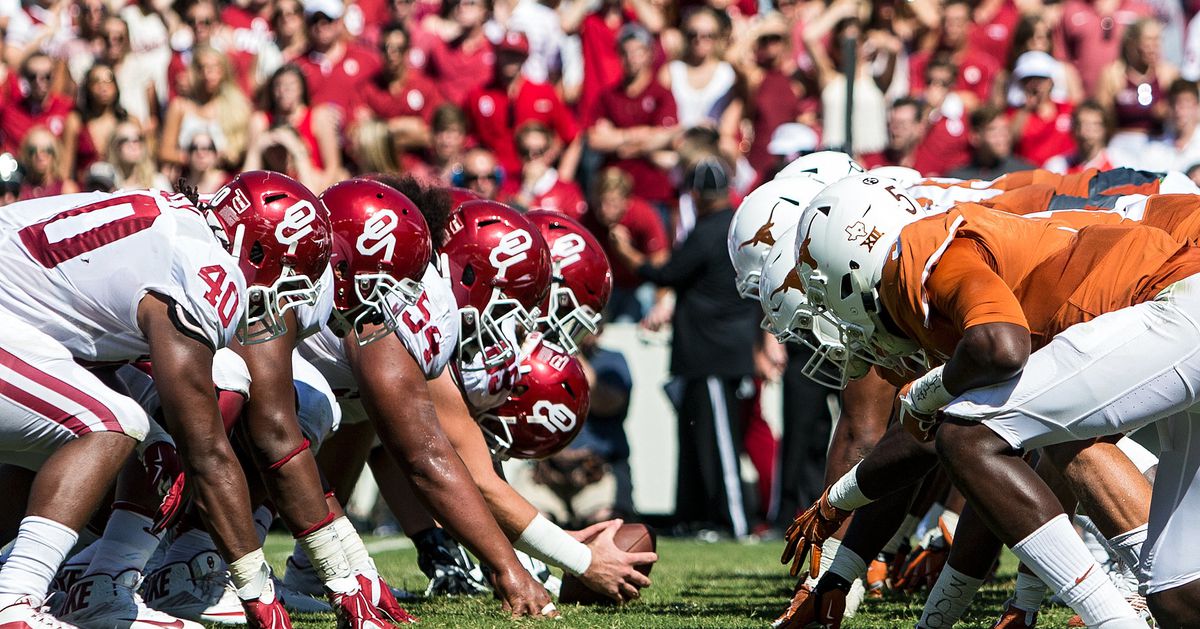 If I’ve learned anything through the various college football conference realignment episodes, it’s that the realignment rules are never the same twice. Let’s review.

After the Supreme Court decision in NCAA v. Board of Regents of the University of Oklahoma As the NCAA television plan violated Sherman and Clayton antitrust laws, the list of 21 independent schools quickly began to shrink as they rushed to join the conference closest to their area. Why? Due to the magical element known as granting of rights: a clause that dictates who owns the copyright in an intellectual property item (almost always the creator) and what rights you can grant the customer to use , copy, reproduce, print, or publish your stuff. In this case, the intellectual property is the university and its associated sports teams and the client who pays to copy, reproduce, print or publish its contents are various media, almost explicitly for the privilege of broadcasting said collegiate sports. TV options in the ’80s were pretty limited so most conferences saw their rights grant sold to regional broadcasters, but this generated a whole new stream of revenue for every conference and every school and magic. money was a better lure than the freedom of sporting independence. So, in the mid-1990s, Penn State joined the Big 10, South Carolina and Arkansas joined the SEC, and the Texas block of the Southwest Conference merged with the Midwest Big 8.

Realignment returned in the early 2010s with a new end goal in mind: conference networks. Schools realized that they could make a lot more money for both the conference and the member institutions if they foot the bill for their own network while convincing the cable companies to broadcast their channel. Spreading the conference propaganda across multiple media markets – ideally as many large markets as possible – and having institutions directly benefit from ad revenue also made much more financial sense. The Big 10 took action first, launching the Big 10 network on September 1, 2007; Meanwhile, instead of running a conference-wide network, the University of Texas – working with ESPN – created the Longhorn Network, specializing in broadcasting all things Texas sports. Not the Big XII … just Texas. This caused the members of Big XII Nebraska, Colorado, Texas A&M, and Missouri to start looking for other conferences that would let them in and, you know, actually work together to create revenue sharing opportunities. Nebraska ended up in the B1G, Colorado in the newly formed Pac 12, and A&M and Missouri in the SEC. The B1G took Maryland and Rutgers for the sole purpose of expanding their network footprint on the east coast. G5 Conferences also began fetching dollars for the Conference Network, with Conference-US poaching mediocre programs from other conferences based solely on their media market, while the US and Sun Belt have called FCS teams from cities outside the territory to reconstruct the depth of their conference.

But this round of realignment is not about regional broadcast rights, the creation of television networks or the exploration of new media markets. It’s always about the money, mind you (because it still is!) No, at this point it’s all about building the brand and finding the best and most expensive products on the market and to bring them together under the same corporate umbrella to broadcast them to the greatest number of viewers in the age of streaming. The SEC is taking the first step in this new arena of realignment by capitalizing on the weakness of the Big XII and winning their crown jewels: Texas and Oklahoma. Without these two schools, the XII loses its only power to claim the Playoffs in Oklahoma as well as its main economic engines, would be estimated at $ 938.9 million and 12,623 jobs. SEC wins two historically excellent field programs and two valuable brand properties, college athletic programs # 2 (Texas) and # 6 (Oklahoma) according to Forbes. With that tucked into Greg Sankey’s pocket, he and his staff now have momentum and influence in all future rights negotiations.

I have seen a few Mizzou personalities telling Tiger fans to rejoice. To rub it in the face of the states of Kansas, Baylors, Nebraskas, and especially Texas and Oklahoma, who openly mocked Missouri for its failed B1G bid and anticipated field failures in the DRY. I’ve read articles saying we should laugh back and poke fun at Texas and Oklahoma for doing exactly what Missouri did ten years ago. And yes, I have that feeling. But I don’t think we have a lot of room to be boastful and snobbish for a long time.

What I learned from this go-around is that – like anything else in this country – the golden rule applies: whoever has the gold makes the rules. And if Texas wants to give the double birds to the conference it created and forcibly redeemed for its own greed, causing it to fall apart as a result of its decision, GUESS what absolutely they can. If the SEC – the most successful and richest football conference in the country – wants to annex a historic blue-blooded program and a current elite program, it will, the consequences are damned. So why stop there? Why not hook up Clemson and Florida State while they’re at it? Or, damn it, add Ohio state, it’s right next to Kentucky anyway!

I am happy that our school’s decision is rewarded now, but what will happen in ten years? When, say, a Bama / Georgia / Florida / Texas / Oklahoma /LSU/ Is A&M working with Clemson, Ohio State, USC, Oregon and Washington to create a great conference? Do you think Missouri is getting the call to join this conference, or are we left behind with South Carolina, Vanderbilt, and Mississippi schools as SEC remnants? It’s not a big step to envision a future where a super conference exists – completely devoid of geographic and media market limitations, empowered by the SEC’s blatant land grab – to reap the country’s best football programs. in a super conference that can guarantee the maximum revenue for any network with an app that desperately seeks to grab viewers’ attention on live TV to expose them to commercials costing tens of thousands of dollars apiece. And this great conference will have 20, may be 30 teams which have their own commissioner and are the only ones allowed to participate in the ESPN college football qualifiers. A super league like this doesn’t have South Carolina. Or Ole Miss. Or Purdue. Or TCU. And certainly not Missouri.

So what’s my point? Well, on the one hand, enjoy the “winning realignment” while it lasts. But also, let’s make Missouri a program that would be a viable addition to a possible super conference. Let’s show up in droves to games to let Eli Drinkwitz know we care and support the team. Let’s create a conference environment that makes visiting teams hate playing and woo elite prospects to come and play. Create a home sales record. Call Finebaum. Be vocal and enthusiastic and show up at Mizzou sporting events to keep the momentum going and make Missouri a program to have. If we can do our part on the things we can control then hopefully the coaching staff and the team can do their part by winning recruiting battles, games and division titles. I don’t have enough common sense to know if it will be worth it, but we should make it our goal anyway. Let’s make this program an entity that we want to acquire at every turn of realignment. It doesn’t take a lot of apathy to lose that next chance.