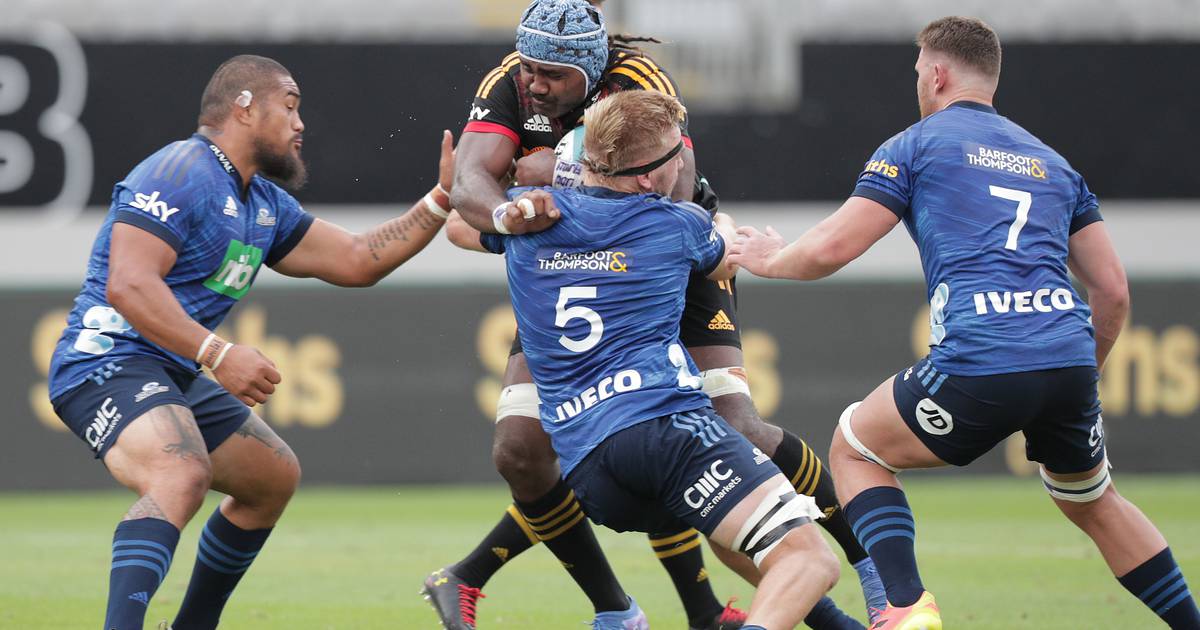 Ofa Tuungafasi needed 28 stitches to his head after catching a loose boot in the Blues’ 25-0 win over the Chiefs in Hamilton last weekend.

The horrific injury hasn’t stopped him from returning to the defensive line – a sign of commitment his team may need against the Crusaders on Friday.

If the Blues‘ shutout win over the Chiefs last weekend despite playing with 13 men for nearly 10 minutes was evidence of a tectonic shift within a traditionally underachieving franchise, Tuungafasi’s actions with blood dripping from his head after making a tackle may be the personification of this.

Tuungafasi then posted a picture of his newly stitched head, blood still visible on his face, on social media after his team’s victory at FMG Stadium Waikato, and skipper Dalton Papalii admitted on Wednesday he had little sympathy immediately after the incident.

“I remember he made a tackle and I picked it up and he looked at me and his whole face…but you’re not hurt in defense so I told him to get up and come back in the lane. line and he tried to make a hit and I got dizzy,” Papalii said.

The Blues will hope Tuungafasi’s commitment is contagious because while they haven’t beaten the Crusaders in Christchurch since 2004, their recent performances with newly acquired relentlessness in defense and attack suggest they have a better chance than the average this time.

Tuungafasi, with his head bandaged and with the relative protection of the headgear, will start in jersey No. 3 at Orangetheory Stadium.

His side are above the Crusaders on the Super Rugby Pacific table, albeit thanks to a better points differential. They will face a red and black team that failed to display their accuracy and efficiency in recent unconvincing wins over the Highlanders and Hurricanes.

It was always going to be a monumental clash in the wider context of the competition and it comes after their first scheduled fifth-round meeting on March 20 was called off due to Covid.

It also comes with several intriguing storylines, apart from the long drought of the Blues’ Christchurch win and the northerners’ recent form after winning the trans-Tasman competition last year.

The return of Tuivasa-Sheck

Luke Romano’s return to his former franchise – where he played for 12 years before being deemed surplus – is one in itself, as is midfielder Roger Tuivasa-Sheck’s return from injury.

Tuivasa-Sheck, the former Warriors skipper, has not played since the Blues’ victory over the Chiefs at Eden Park on March 5 due to a shoulder injury.

Prop Nepo Laulala is on the reserve bench after serving his three-week suspension and there is power and pace in the Blues line-up. Injured free forward Akira Ioane trained today but is not considered fit enough to play after recovering from a foot injury.

Coventry and Papalii confirmed the Blues’ victory over the Chiefs boosted their confidence, but did little more than what has traditionally been the biggest test of a New Zealand side’s pedigree – playing the Crusaders at home. .

“Sometimes we were under the pump, with 13 men at one point, and managed to hold the Chiefs scoreless as everyone knows,” Coventry said. “It’s a good sign, but it doesn’t give us anything more than confidence going into this game.”

Papalii said: “Belief is a big part of it. We haven’t beaten them there in a while.

“We are building this year and there is something special about this group that I have felt at times in previous years. It has been constant since this defeat against the Canes in the first round.

Coventry added: “They’re the team that have won back-to-back Championship wins – back to back. Teams have been chasing them for a long time. But history has to be changed at some point, so it’s up to us. We respect them and admire what they’ve done, but we just have to go out there and do what we have to do.

“You have to go out there and play… you have to stick to your guns.”

The Blues team will face the Crusaders at Orangetheory Stadium in Christchurch, kick-off at 7.05pm on Friday is: