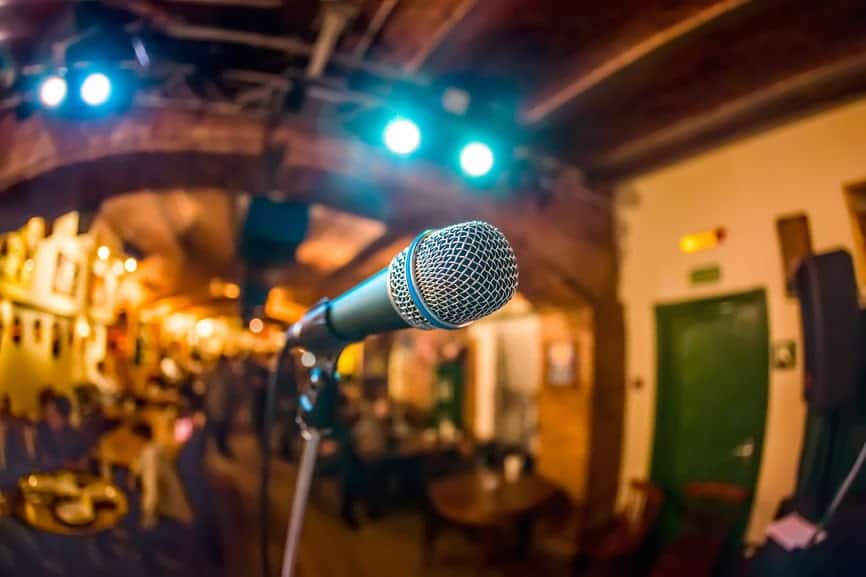 An article invited by Angela Mastrogiacomo for ReverbNation.

You have dreamed of this moment a thousand times.

But when you open your eyes, reality is anything but the magic you were hoping for. In fact, when you take the stage, you are a little terrified. Sweaty palms, a knot in the stomach, a threatening heart beat outside your chest … and you realize you’re nervous. Like, nervous madman. All the fears and doubts you had about yourself are invading your mind right now and you are panicking.

Stage fright, believe it or not, affects more musicians than you might think. In fact, most musicians will experience some sort of healthy anxiety before taking the stage, but to others it can seem almost crippling, preventing them from doing the performances they not only want to do, but need do to expand their career.

And while a good dose of fear is a good sign that you actually care about what you’re doing, you’d probably also like to take the stage and enjoy it instead of wanting to run as far as possible. So here are a few ways to strike back and start liking the scene.

Reframe your perception of fear

Believe it or not, fear and excitement are actually rooted in the same emotions, and they create the same response in our bodies.

It’s the same thing. Our bodies react to both things in exactly the same way. The only difference is the story we tell ourselves as to why this is happening.

Now, I’m not saying that if you’re in a truly dangerous situation you should try and go wrong by saying it’s exciting (although many adrenaline junkies do), but rather, when our bodies start. to feel that nagging doubt that precedes a panic and we’re not really in danger, try to reframe it.

In that case, when you get ready to go on stage, instead of thinking “this is terrifying, and if I suck they are all going to laugh at me” think “this is exciting!” I can do what I love in front of a paying audience, I can have fun and hang out with my friends, it’s gonna be awesome! Take it a step further and say it out loud too. I know it might sound silly, but it increases the efficiency by 10.

It might seem a bit odd, and even a bit forced at first, but as someone who has tried this firsthand when she was nervous, I can tell you that it really works, and the more you do it, the more you will. train your mind to see this as an exciting opportunity instead of a scary one.

Develop a routine before and after the salon

In my opinion, a lot of these fears stem from the unknown and the general lack of control around them. If you can develop a cohesive and calming pre-show routine to get you in the right frame of mind, as well as a post-show routine to celebrate your success, then you are on the right track.

Think about what will keep you calmest and happiest, and do it. For example, maybe it’s meditation or maybe it’s you spend the afternoon before the show alone watching TV shows. Maybe you blow up your favorite song and dance to get pissed off (I’m a huge fan of that one). Develop a routine that works for YOU.

Then create a reward after the show. I’m very committed to rewarding ourselves for the hard things we’ve done so if that was me I would say ‘after this show you’re going to treat yourself to an ice cream sundae’ or ‘after this show you get to sleep tomorrow and wake up as late as you want. Having something to look forward to and recognizing yourself for a job well done is extremely important.

Looking for your next gig? Look for ReverbNation opportunities today.

It is practice makes perfect

The more prepared you are, the less anxious you will feel. It’s just a fact. So if you are feeling anxious about going on stage, one of the steps you can take is to simply practice more.

Practice your instrument, practice in a group, practice the type of joke you’ll have on stage, and practice moving around. I’m sure the more prepared you feel and the more you put into practice, the more confident you will feel.

At the end of the day, you have to go out there and put all of this great advice to use. You can think about it too much until you’re blue in the face (although that’s what brought you here), but at some point you have to come out, come back on stage, and put it all into practice.

The only way to fight the stage fright is to go over and over again, see that nothing horrible is happening (or that if your worst fears are happening, they weren’t that bad), and keep going.

This is the same way that I have approached all the obstacles that I have encountered and I can tell you that it really works. For example, I hated phone calls. I still don’t like them, but I don’t get nervous and give myself headaches every time someone comes up with one.

They were causing me so much anxiety. So I forced myself to phone A LOT. In fact, I would suggest a call when an artist contacted to work together or someone wanted to connect. I forced myself to overcome the discomfort. And now? It’s totally second nature.

Remember, now is your time to shine on stage, so own it!

Angela Mastrogiacomo is the founder and CEO of Muddy Paw PR. She loves baking, a good book and hanging out with her dog Sawyer.