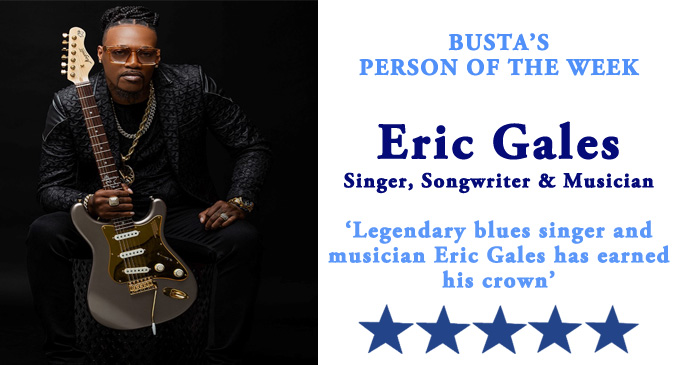 In 1992, the legendary Carlos Santana was a guest at the Arsenio Hall Show. Arsenio asked Santana: “You worked with Hendrix. Are there any Hendrix-caliber musicians around today? Santana replied, “Sure! There’s a younger brother from Memphis, Tennessee, his name is Eric Gales. He’s 16, still in high school, and he’s absolutely amazing.

In 1994, Carlos Santana invited Eric to join him on stage at Woodstock. “I received a call from Carlos. He said, ‘How do you feel about being my special guest at Woodstock?’ There were a million people in the crowd. We did a Hendrix tribute and that’s the most people I’ve played for in my life. They had fighter jets flying above the scene with purple smoke billowing from them. It was the biggest and most intense concert I’ve ever done in my life! The purple smoke was a tribute to Jimi Hendrix’s classic “Purple Haze”.

Since 1991, due to his swagger and electrifying showmanship, fellow musicians and fans have heralded Eric Gales as the second coming of Jimi Hendrix. “It’s serious, Busta! To have my name in any sentence with his is the greatest honor and compliment in the whole world. I hold the guitar in my left hand like him, and I prefer him a little. But, just to be clear, I’m not trying to be the next Jimi Hendrix. I’m clearly trying to be the first Eric Gales. And if I can continue to be successful and create my own legacy, that would be the best way to honor him,” he said with a very humble spirit.

Eric’s sound and style are second to none. The closest thing to describing Gales sound is a perfect blend of BB King, Carlos Santana and of course Jimi Hendrix. His vocal skills are equally awesome. “I think I can hold a tone,” jokes Eric with a laugh. “Let my wife say it, I’m in the house singing gospel and R&B. But gospel is what I came to sing.

“My style is a mixture of influences that I had to come. Like gospel, old traditional blues, funk, soul, rock’n’roll. So, I try to stay away and let my body allow the spirit running through me to do its thing. And it hasn’t disappointed me yet. I chose to sing and play the blues because it had been in me since I was four years old. Blues and gospel were the seeds.

At 47, the future Rock’n’Roll Hall of Famer has carved his own legacy into the music industry. It’s been 30 years, 18 albums and sold-out concerts around the world. Eric Gales has definitely earned the title of legend. His good friend and music producer Joe Bonamassa told Gales, “After everything you’ve been through, you deserve to stand on top of the mountain and get your crown.”

Crown is the title of Gales’ latest album, fitting, due to an extremely difficult journey. He overcame substance and alcohol abuse. But it wasn’t a smooth transition, “It was a combination of curiosity and being caught up in the street. It started with weed and cigarettes, then came heavy drugs. And that lasted about 30 years, man. I don’t know how I survived that, Busta.

In 2009, he served a prison sentence for possession of drugs and a weapon. “When I was on drugs, it gave me the wrong kind of notoriety. And I only had ‘yeses’ around me, people always said yes to me, and very few people said no to me. That wasn’t good, and it almost killed me.

Gales’ addiction hampered his relationships with close friends and family. Still, the distance gave him time to do some serious soul-searching. “I finally got to a point where I just got tired. I have the right people around me and I think about what I’ve been through, and I’m not looking back. I didn’t come into a broken home or the plans. My parents were together. So I have none of that to blame. It was just curiosity and by my own hand, I got caught up in it. My parents always raised me to be focused, never stop praying, and take care of business. To God be the glory, this is how I live my life today,” Eric shared.

Today, Eric Gales is six years clean and has renewed and rebuilt his relationships with family and friends, like Carlos Santana. “I’m so glad I got to harness our relationship again. Every other day we’re texting, zooming or talking on the phone,” Gales said.

In 2019, he reconnected with his good friend Joe Bonamassa and then the magic began. Joe produced Gales’ highly acclaimed album, Crown, which is on the band’s Provogue/Mascot label. “My life has changed enormously. So when Joe and I reconnected and decided to do Crown, he said, “You deserve it and I’m going to do anything to make it happen.”

“This record was made in the midst of the COVID pandemic and many racial injustices. And let’s be honest. Racial injustice has been happening since I was born, and now I have a platform to unite and spread the word. There are a lot of people who want to hear what I have to play, so now I want them to hear what I have to say. So Joe, my wife LaDonna and all of us thought about the best way to present the best Eric Gales record possible. And I think Crown is a perfect example of that,” the proud husband of ten years said.

Eric has developed a raw and rugged vibe, as weakness isn’t optional if you want to survive the streets of Memphis. But, when recording Crown, her soft, sensitive side was exposed. He would burst into tears while singing. “I was already emotionally drained from playing these songs, then the lyrics and topics of some of these songs happened to me personally and I had to be comforted several times. If you take the lyrics to songs like ‘The Storm,’ ‘Too Close to the Fire,’ and ‘Stand Up,’ if you read them without singing them, the same thing can happen to you too,” a very passionate Eric said. Gales.

The foundation of his strength and the way Eric continues to stay clean, focused and driven he attributes to his beautiful, resilient, talented and brilliant wife LaDonna Gales. She is also his manager and percussionist in The Eric Gales Band. “When I was at my lowest, she was my lifeline. And she still is today. It was her unconditional love and care for me that helped me realize that there is something thing here called life. And I was not limited. It’s an extreme pain point that I play from, and now I use that as a passion to keep going.

After listening to Crown myself, it also brought up a lot of emotions due to my personal experiences. It also inspired me to keep putting boots on the ground in our fight for love, peace and equality. The Crown album is the soundtrack to the world we live in today, and a definite contender for Album of the Year at the 2023 Grammy Awards.

My phenomenal person of the week is Eric Gales.

For more information on Eric, tour dates, or to purchase a copy of Crown, visit ericales.com. On social media @ericgalesband.