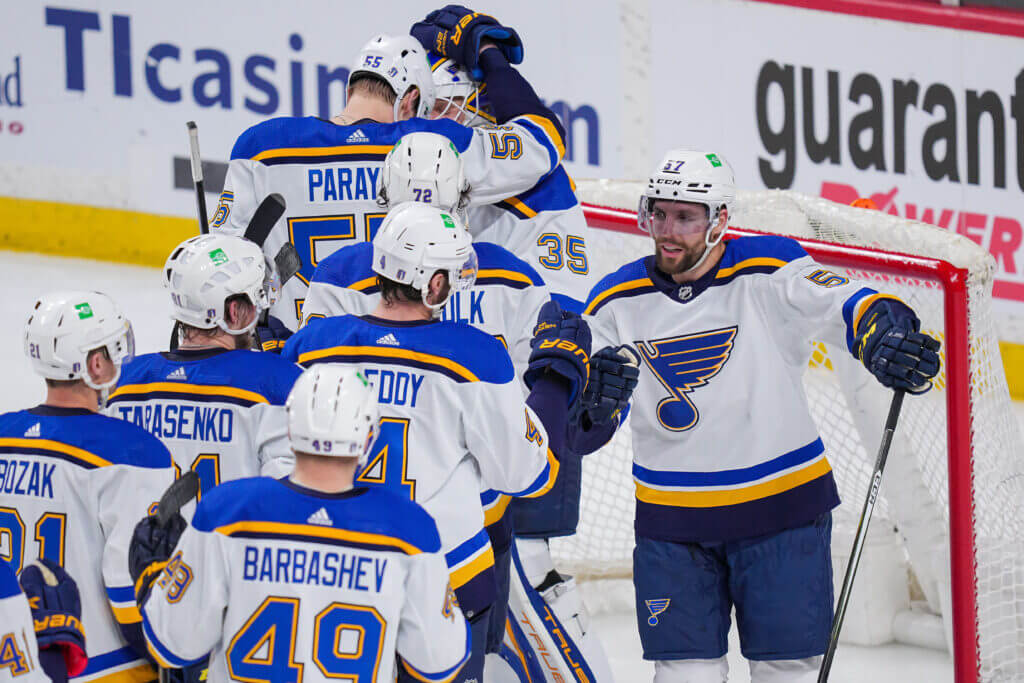 After his hat trick in the Blues‘ 4-0 shutout of Minnesota in Game 1 of their series, Perron was asked how good he must have felt after sitting out the 2021 playoffs against the Colorado with COVID-19. As you probably remember, he tested positive the day the team was leaving for Denver, and the Blues were swept by the Avs before he could be cleared.

In June, weeks after the end of the season, a healthy Perron said Athleticism that he watched the first-round series from the basement of his St. Louis home and wanted to “hit the walls” because he couldn’t help his club.

Admittedly, the veteran thought about that when he came out of the Blues tunnel for pre-game warm-ups on Monday for his first playoff game since August 2020 against Vancouver in the bubble.

“Oh my God, not one, but you just reminded me,” Perron said with a smile. “I think the worst part was just not being part of the team. I was literally going crazy. I couldn’t get out of the basement. Difficult situation.”

That may never need to be mentioned again after Perron’s performance against the Wild, when he became the 14th player in Blues history to score a hat trick in a playoff game. It was a four-point night for him, including an assist that gave him a helping hand in all four of his team’s goals.

“After all these years, it’s a long (time) coming for many reasons, many ways, so obviously I’m proud of that,” he said. “It’s super cool. I’m very proud to wear the Blue Note.

In what was a splendid night for the Blues special teams, including his two power-play goals, Perron helped the visitors take a 1-0 lead in the first-round series, which will resume with the Game 2 Wednesday. .

While many in St. Louis were hoping for a home advantage in the series, it was Perron last week who told everyone he preferred the Blues to open on the road. They would have more focus, he says.

That said, Perron knew the Wild would be humming early.

“I think it’s important, the older guys are just trying to weather the storm,” he said. “I think we did a good job, scoring the first goal.”

This goal, after only 6 min 15 s of play, went to Perron with one second to play on the power play.

“Just a rebound goal, trying to net,” Perron said. “I know there are a few seconds left on the power play, maybe a second, and I managed to put one home. We do a good job of pre-scouting what we want to do on the power play, and it’s good to connect for sure.

Les Bleus extended their lead to 2-0 after 16 minutes.

Perron didn’t score this one — it belonged to Ryan O’Reilly — but it was his patented puck protection that led to the scoring streak.

In the clip below, watch Perron keep the puck away from Minnesota defenseman Dmitry Kulikov and also evade Wild’s Mats Zuccarello.

“He’s competitive,” Blues coach Craig Berube said. “He hangs on to the puck and doesn’t lose it.

This allowed the Blues to move the puck into the zone, and eventually Justin Faulk passed the net to O’Reilly, who scored on his own rebound.

In the second period, with the Blues holding a 2-0 lead, Perron took his second penalty of the game, and this one may have been misguided. He deliberately held Minnesota’s Kevin Fiala stick on the way to the bench.

A power-play goal by the Wild at that point would have cut the Blues’ lead in half, and Perron would have been on the hook for it.

But the penalty kill was terrific, a perfect 6-on-6, and the Blues survived.

Then, just two minutes after Perron left the penalty box, the Blues went on the power play and Perron scored his second goal.

The power play picks up where it left off in the regular season. #stlblues pic.twitter.com/xpMMODJ8O4

It was an incredible shot into space, beating Minnesota goaltender Marc-Andre Fleury, Perron’s teammate in Pittsburgh and Vegas.

“We know each other very well,” Fleury said. “He’s a good shooter. He’s still a threat around the net, I know that. It seems like every puck from the power play ended up on his stick, through the back door, and he put them in there.

“We’re doing a good job of execution, we’re very tough on the puck,” said Perron. “I think right off the bat (O’Reilly) won a lot of faceoffs for us. (Torey Krug) does a great job on and off the stick, whether it’s for (Brayden Schenn) or me, and it kind of gives us that half second that we can play.

In the third period, Perron capped the hat trick with his third goal.

A rebound came his way, and he buried it just two seconds after the power play expired. Otherwise, he would have scored a third goal on special teams.

In Perron’s first 57 playoff games, he scored just four goals. Over the years his role has expanded with more ice time and production has increased. With his three goals on Monday, he has 14 goals in his last 36 playoff games.

“A lot of things,” Perron said. “There are reasons why I would say (why) the production wasn’t there as much in the beginning, but it’s definitely nice to pass now. I will leave it there.

And after missing him in the playoffs last year, Berube is happy that Perron is back and producing now.

“He mentioned he wasn’t there last year. He told me about it today,” Berube said. “It obviously pissed him off. It was a tough break last year for him. He was really good tonight on the power play. He just did his job as he normally does for us.